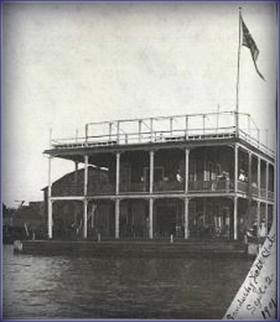 With a 270 degree view of the Sandusky Bay, SYC's first clubhouse provided a great spot for the rocking chair sailors. Notice also the rooftop dance floor that could be covered with canvas for club parties.

For over one hundred years now, the Sandusky Yacht Club has provided its members shelter and comfort when Sandusky Bay waters are not as inviting as the warm fireplace near a friendly tap. The floating population is an attractive asset to any waterway, and many cities view with envy Sandusky's beautiful land-locked harbor. Our club is the scene of activity for twelve months out of the year. 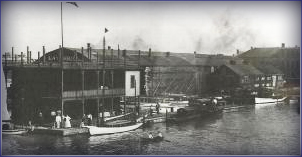 A crowded SYC weekend near the foot of Columbus Ave. In the background is Lay Bros. Fisheries, the largest commercial fishing company in Sandusky. To reach the clubhouse a catwalk ran alongside the Lay Bros. Co.

The original clubhouse of the Sandusky Yacht Club, was situated near the foot of Columbus Ave. It was later moved out from shore and placed on cribbing. This created a semi-closed harbor for mooring boats. This structure served its purpose well until a tornado swept through Sandusky in the summer of 1924 and demolished most of the waterfront. No part of the building was ever found. 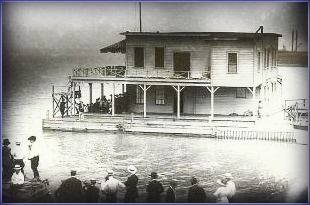 Just like today, the SYC clubhouse underwent many changes. Here we see the Clubhouse, approximately 1920, minus the rooftop dance floor as well as an open second floor veranda.

From that date until the erection of the core of the present club house, the members met in various locations. In the years 1934-35, during the terms of Lee Keller and Dr. C.A. Shimanski as Commodores, the erection of a new club house entered the talking stage. From that time on, throughout the terms of Commodores J.W. Harbecht and Earl Seitz, all members and officials of the club worked enthusiastically until the new facility was opened at our present location on May 13, 1939.

Finally a location suitable to our building committee became available on the Kelly Island Lime & Transport Dock in 1937. The Clubhouse that was built (shown here) had steel I-beams running under the foundation in case removal from the site was necessary.

In the six decades since that opening, The Sandusky Yacht Club has been on a steady course to become one of the finest clubs of its kind on the Great Lakes. Since 1988, the greatest changes have occurred, beginning with the dedication of a 180 slip marina; the addition of new offices, restrooms, and a gift shop; and an improved covered entrance. The most recent additions include 50 additional docks, bringing the total to over 250, additional office space, a casual dining area and bar, additional conference and meeting rooms and a covered outdoor dining area. 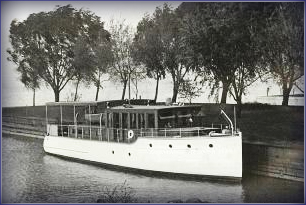 NAVIGO, Commodore Joseph Harbrecht's yacht, became a welcomed sight at SYC as well as I-LYA functions in the 1930's and 40's.

Sandusky Yacht Club membership now hovers over 650, Its fleet boasts nearly 300 sail and power boats. Throughout the years, the Sandusky Yacht Club has changed with the times. But many things remain the same, including the value placed on long-standing traditions set forth by our founders. The Sandusky Yacht Club remains a place for people to gather. It's the setting for swapping stories with friends, both old and new. It's a traditional place to share holidays, regattas and good times.
Ted Homberger,
Chairman, SYC Historical Committee 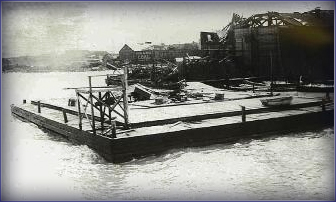 Blown to Bits!
That's what all accounts have to say after the 1924 Tornado that ripped across the North coast. This photo shows the remains of where the Clubhouse once stood. Everything, absolutely everything blew away that day, June 28th, 1924. The clubhouse and most records were never to be seen again.

"If men could learn from history, what lessons it might teach us! But passion and party blind our eyes, and the light which experiences gives is a lantern on the stern, which shines only on the waves behind us."